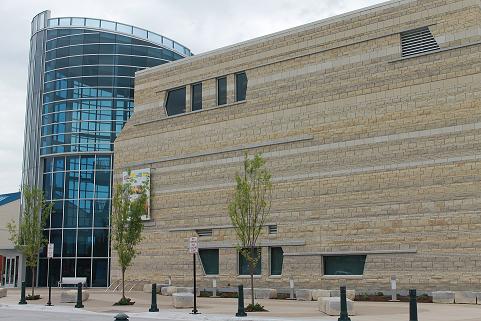 The City of Manhattan has promoted Susan Adams to the position of director at the Flint Hills Discovery Center (FHDC) beginning Feb. 29. Adams currently serves as a Recreation Supervisor in the Parks and Recreation Department.
“We are extremely excited about Susan leading the Discovery Center into the future,” Eddie Eastes, Parks and Recreation Director, says. “She has been involved since before the center was built and has the enthusiasm and experience to be a vibrant leader in this position.”
As the director, Adams will focus on tourism attraction, education and recreation with specific attention on visitor experience. She will work closely with the Flint Hills Discovery Center Foundation, Flint Hills Discovery Center Advisory Board and City departments to coordinate the ongoing development of the exhibits, programs and a highly-engaged staff that will contribute to the successful operation and development of the FHDC.
Prior to her current position, she was the Volunteer/Visitor Services Manager at FHDC where she was instrumental in developing opportunities for community members to be involved with the center. Her role was integral in providing a positive visitor experience.
Adams joined the Discovery Center staff in 2011 while it was still in the development stages and played a key role in opening the facility in 2012. She has served in many capacities at the facility such as, Interim Gift Store Coordinator, Special Events organizer, Interim Event Sales Coordinator and Interim FHDC Director in 2013.
She came to the Discovery Center from Mercy Regional Health Center where she served as the Director Volunteer/Visitor Services for over five years. Susan has also worked professionally with two regional Girl Scout Councils as Program, Field and Public Relations Director for over seven years in Missouri. She has a Bachelor of Science degree in Leisure Management/Recreation from Missouri Western University in St. Joseph, Mo.
Adams and her husband Mitch have lived in the Westmoreland area since 2002. They reside on a seven-acre farm in a limestone home built in 1877 and have two adult children, Shelby and Shane.
Adams will work with current director Fred Goss whose last day is March 11. Goss has been the director for the past three years and announced his resignation February 4 to pursue other opportunities.