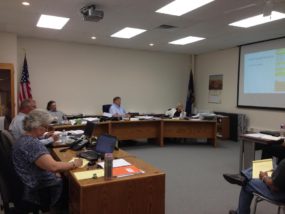 Pottawatomie County Commissioners got a bit testy with each other Monday, with a road issue mentioned by Commissioner Pat Weixelman leading to a reference to the election by Commissioner Dee McKee–and a couple minute break for Weixelman who told McKee he took her comment as an insult.
Weixelman had expressed concern for several years about the safety of Say Road, suggesting maybe a chip and seal and speed limit reduction might make it safer for children who are often in that area. While the subject was later dropped, Public Works Director Peter Clark first went over some of the traffic numbers on area roads–with one having quite a bit more traffic than Say. Vineyard Road south of Highway 24 right now has 532 cars a day, the highest traffic volume for a gravel road anywhere in the county. Say Road is the sixth on that list and has 288 cars a day.
Commissioner Stan Hartwich also indicated support of a quick chip and seal in that area, but McKee questioned what she called “short term fixes.” When Weixelman returned he did not discuss the matter further and it did not end up being acted upon by the group.
McKee at the end of the meeting said she sincerely apologized about the election comment, indicating it was frustration about random projects –adding “my mouth often exceeds my brain.”
Commissioners did say yes though to six miles of asphalt overlay projects and parking areas for county facilities amounting to about $619-thousand–with bids to be opened June 27th. McKee requested a mold inspection of the appraisers’ office area prior to work at the facility which is to be done.
The asphalt overlay will be on Excel, Dyer, Rock Creek, Campbell, Rolling Prairie, and Golden Belt Roads.
Leslie Campbell, the Pottawatomie County Health Director visited commissioners and indicated her department has had a busy month of meetings, trainings, and gearing up for vaccinations . The commission also signed a plan for isolation and quarantine in case of an ebola or turberculosis outbreak. Campbell reported the Drug Take Back event collected over 75 pounds of pills, making the event a success for the county.The Community Heath Ministry requested funds at the Commission meeting. Community Health Ministry provides life skills classes for those in need.

Pottawatomie County signed a plat near Washington Heights at the meeting. And a contract was signed with J&K for Whispering Meadows Unit 4 for street, water, and sewer construction.