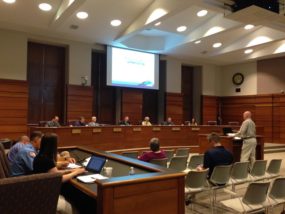 The Riley County Law Board Monday approved the Riley County Police Department’s 2017 budget by a vote of six to one, with basic adjustments, court security, a half year mental health contract, and one dispatcher. The approximate $20,291,055.19 is 2.667 percent over last year’s.
While the budget passed, there was considerable discussion about the court security aspect, with Board member Wynn Butler, the sole “no” vote, expressing concern about the number of personnel to be hired.RCPD Assistant Director John Doehling  responded a lot is involved with staffing, especially with periodic absences by some of the group.
Board Chair Robert Boyd differed with Butler, saying he’d much rather trust staff to make adjustments as needed as they move forward. RCPD Director Brad Schoen indicates the staffing is what is needed with possible absences by some of the group. Schoen also emphasized the budget proposal includes the staffing to do it right.
Board member Barry Wilkerson, who also serves as Riley County Attorney, backed up the Director–saying Senior Deputy County Attorney Barry Disney, who has worked in courtrooms across the state, describes Riley County’s current security system as the worst he’s seen.

During the public hearing only one member from the public spoke–local attorney Joe Knopp who attended last months meeting, again questioned the amount being spent on additional sworn and non-sworn officers in the courthouse. Knopp also expressed concern about only one portal for entry and exiting, which he referred to as the same “cattle chute.”