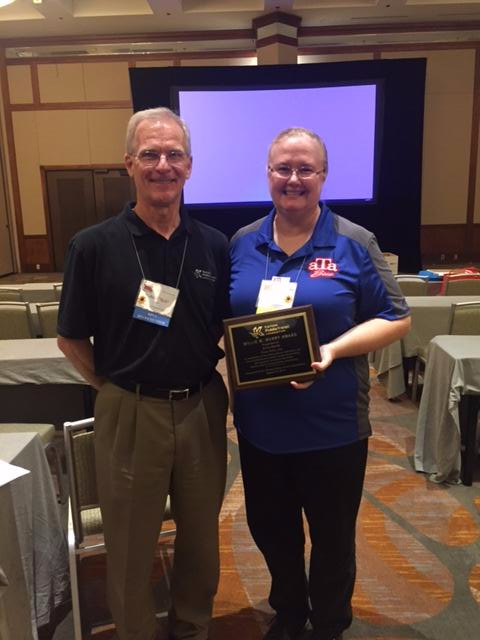 A local transportation official received some state recognition recently.  Flint Hills Area Transportation Agency Director Anne Smith was presented the Willie M Murry Award at the annual Kansas Public Transit Association (KPTA) meeting. The award is presented to an individual who has distinguished himself or herself in serving public transit in Kansas. It is named after Rev. Willie M Murry who was a dedicated pioneer for transit in the State of Kansas.
Smith has thirteen years of experience writing Federal, State, and Local transportation grants and budget requests, including a $2 million American Recovery Reinvestment Act (ARRA) grant for the construction of a regional transit facility. She has extensive experience in all aspects of transit operations and successfully progressed from a driver to the Director position over the past fifteen years with the agency.
In her current position, Smith is responsible for all budget preparation and management and she serves as liaison with city, county, state, and federal agencies, with responsibility for implementing those jurisdictions’ and FHATA policies, as well as applying for grants and budget requests. Additionally, she is responsible for the interpretation of plans, directs, and coordinates the transportation operations, and is responsible for general administration and office management.
Her professional experience includes the following: thirteen years working with Federal Transit Administration (FTA) and the Kansas Department of Transportation (KDOT) regulations and compliance issues for federally funded public transportation projects; nine years preparing and managing multi-million dollar annual operating and capital budgets.
Additionally, she has six years of project management and software implementation experience. FHATA has successfully installed and is running the new Dispatch Software that will assist in coordinating transportation services in the region. The current fleet has been equipped with on-board tablets to coordinate with the new software. The agency is
currently working to acquire and implement an App to provide riders with Real-Time transit information.
In 2011, she became the first Mobility Manager in the State of Kansas. Sha has worked with KDOT to develop and implement the “Service Contract” model that is now used throughout the entire state among rural public transit providers.
Smith, in collaboration with the FHATA Board of Directors, City, County, Kansas State University (KSU) officials, the Federal Transit Administration (FTA), and the Kansas Department of Transportation (KDOT) worked to successfully plan and implement fixed route public transportation within the city of Manhattan.
She has successfully worked with local jurisdictions, business, and educational leaders to develop and implement regional demand response public transportation services within the Riley, Geary, and Pottawatomie county areas.
In January 2016, the Flint Hills Area Transportation Agency, Incorporated (FHATA) became the first transportation provider in the State of Kansas to receive both Federal Transit Administration (FTA) Section 5307 and Section 5311 funding. FHATA was awarded a five (5) year contract with the Flint Hills Regional Transit Administration (FHRTA) to provide transportation management, planning, and operations of citywide fixed route, general demand response, and complementary paratransit services, to include: Jardine Routes, SafeRide, Park N Ride, AP Design, and a Saturday Shopping Shuttle.
Additionally, the agency has worked with the University of Kansas Transportation Center and Geary County officials to conduct a feasibility study and to plan for the implementation of fixed routes in the Junction City and Grandview Plaza area. Operation of the three new routes began in April 2016 and will provide fixed route service in Junction City, Grandview Plaza, and greater Geary County.
Smith supervises a staff of 50 employees ensuring compliance with FTA, KDOT, and State of Kansas Division of Motor Vehicles, training and federal mandated drug and alcohol program administration.
Under her leadership FHATA has reportedly seen a 753% growth in ridership (48,853 riders in 2010 compared to 367,698 in 2014) since 2010. This increase in ridership does not include the Wamego Regional Shuttle, APD West route, or the Junction City Fixed Route. With this growth, they have continued to provide quality transportation to the community. They have acquired additional vehicles and hired and trained new drives to meet the continued growth in ridership of the area.