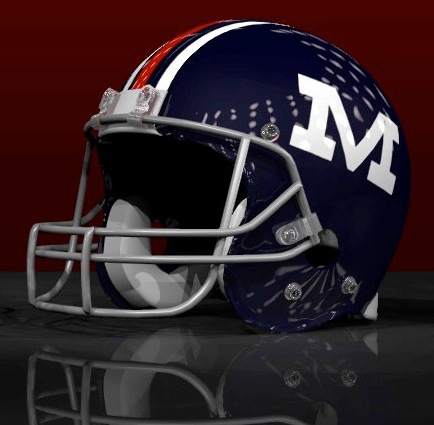 Max Stanard’s interception in the closing minute sealed the victory for the Class 6A No. 1 Manhattan Indians over No. 4 Washburn Rural Friday night 28-25 at Bishop Stadium.

The victory marked Manhattan’s third win this season over a ranked opponent. For Manhattan, it also marked a win over the only team to beat them last year during the regular season. The contest saw a number of penalties on both sides of the ball, some early special teams gaffes by both teams. Manhattan won the turnover battle, coughing it up on a fumble in the red zone in the third quarter.

Defensively, the Indians battled through adversity, turning the Junior Blues over three times by way of interception as quarterback Brant DeWeese threw three picks, including a pair from defensive back Dante Walters. Despite giving up a 76 yard rushing touchdown to Ma’kenttis Adams on the third play of the game, the MHS defense held him in check the rest of the game, only allowing him to gain an additional 80 yards on 20 overall carries. DeWeese, who throws a lot, finished the night 19-of-31 passing for 204 yards including two touchdown throws and those three interceptions.

The Indians got another strong game from quarterback Keenan Schartz, who finished 16-of-22 passing for 202 yards unofficially, throwing 1 touchdown pass of 49 yards to Jaxon Bowles in the first quarter. The Manhattan offense, totaled over 330 yards in a balanced attack. DeAndre Aukland paced the running backs with nine carries for 76 yards, including touchdown rushes from 20 and 38 yards out.

The two teams traded scores in the first half, with Manhattan eventually going up 21-17 by halftime, after Schwartz scampered for a 5-yard touchdown run in the closing minute of the second quarter. In the third quarter, both offenses struggled to muster any rhythm but eventually MHS would extend its lead to 28-17, riding its defense the rest of the way.

Manhattan (4-0) travels to Emporia (1-3) next week. The Spartans fell on the road at Topeka Friday night 34-21, and have lost three straight since its opening week win on the road at Pittsburg. The football program has also been dealing with off the field issues a police investigation was launched over allegations of battery involving some members of the Emporia football team.

Kickoff from Welch Stadium will be at 7 p.m. Friday. You can hear the game on News Radio KMAN.