You are at:Home»Local News»Area lawmakers tackle issues at Manhattan forum 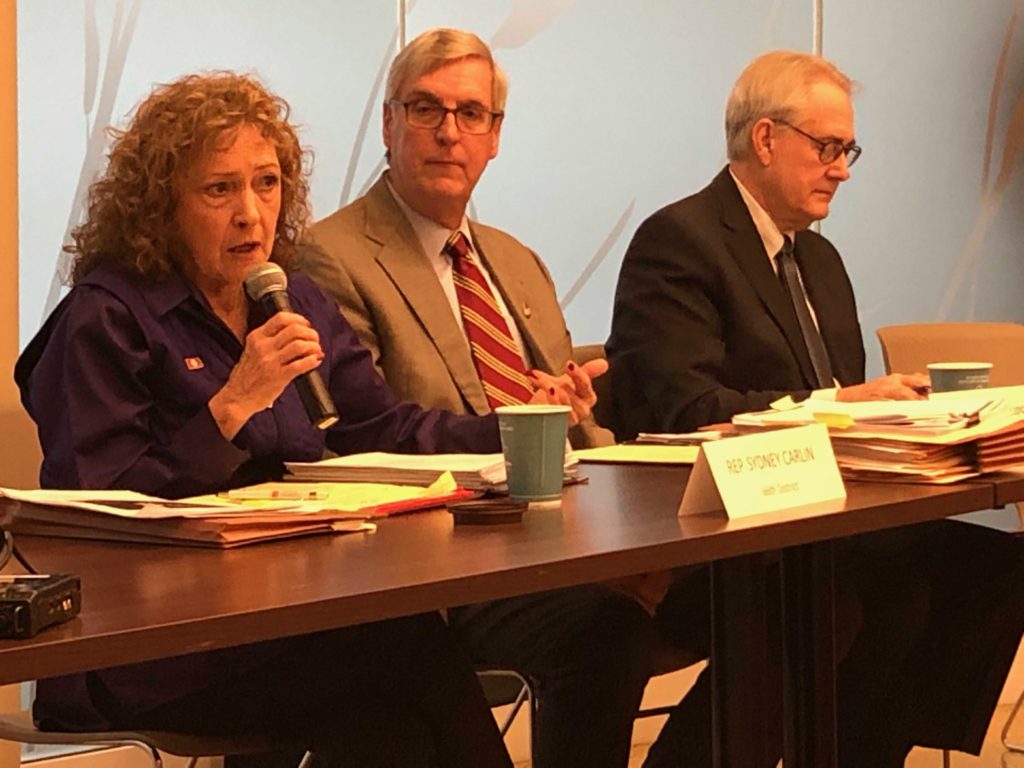 MANHATTAN — Hurdles to Medicaid expansion were a major highlight of Saturday’s legislative coffee held at the Sunset Zoo Nature Exploration Place. The event was hosted by the Manhattan Area Chamber of Commerce.
All three Manhattan lawmakers support Medicaid expansion. Hospitals have lobbied for expansion as well but conservative leadership in the statehouse has been content on keeping any bill from coming to the floor for debate. 67th District Representative Tom Phillips (R-Manhattan) says he believes it has enough momentum among both parties.
Phillips challenge
Kansas is one of 14 states that has not expanded Medicaid. Committee leadership is largely conservative in both the House and Senate. 66th District Representative Sydney Carlin (D-Manhattan) says those who oppose are more worried about the cost associated if federal dollars dry up in future years.
Carlin medicaid
Getting a Medicaid expansion bill out of committee would require a vote of 70 legislators to force leadership to bring the bill to the floor. Getting it out of the Senate is another challenge. Sen. Tom Hawk (R-Manhattan) says it will be interesting to see how Gov. Laura Kelly approaches the two branches of government to negotiate a deal to bring Medicaid expansion to a debate.

Another topic brought up Saturday was whether enough is being done by lawmakers to address the ongoing teacher shortage. One area discussed was amending rules pertaining to teacher licenses. Sen. Hawk says he wasn’t aware of any current legislation but says the state does not unlawfully delegate the authority of the state to accept lower standards from other states.

Rep. Carlin liked Hawk’s idea and says there’s no reason something like that wouldn’t pass. She says sometimes lawmakers have to get creative in addressing issues like this one.
Carlin creative

Rep. Tom Phillips says in general the licensing process is good but says each state has a different approach. He says it’s a conversation that should be had.

Also discussed by the three lawmakers was the present state of the Kansas foster care system and the problems that have plagued the Kansas Department for Children and Families. With some 70 foster kids unaccounted for in an April 2018 report and other reports of children sleeping in offices, Gov. Kelly has already begun an overhaul of the agency. Earlier this year Kelly hired a new DCF director and earlier this month announced plans to terminate current grants and reopen the bidding process.

Sen. Hawk commended Gov.  Kelly’s efforts to rebid some of the contracts with DCF and praised new leadership at the agency under Laura Howard. He says most of the kids in the foster care system aren’t running away but rather running toward a better situation.

Phillips says the issues that have dogged the Department for Children and Families is unacceptable and will likely require additional funding.

Rep. Carlin says efforts are being focused on recruiting more workers, specifically in student interns because there have not been enough coming through the pipeline to meet the state’s needs.