You are at:Home»Uncategorized»Boys State of Kansas Leadership Academy meeting in June

Nearly 500 young men from across the State of Kansas, all of whom will be entering their senior year of high school this fall, are anticipated to participate in the 2016 session of the American Legion Boys State of Kansas Leadership Academy (ALBSKLA). The event, in its 79th year, will be held Sunday, June 5, through Friday, June 10, at Kansas State University in Manhattan.

The ALBSKLA provides a relevant, interactive, problem-solving experience in leadership and teamwork that develops self-identity, promotes mutual respect and instills civic responsibility. Boys State is a “learning by doing” political exercise that simulates elections, political parties and government at the state, county and local levels, providing opportunities to lead under pressure, showcasing character and working effectively within a team. It’s also an opportunity to gain pride and respect for government and the price paid by members of the military to preserve democracy. 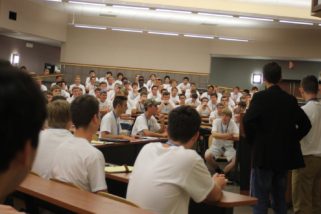 The meeting of the minds. Campers experiencing democracy.

The following are the major events and special speakers during the week that are open to the public:

Swearing in of KBS mayors by 2015 KBS Governor Bryce Johnston, a resident of Leawood, Kan., and a 2016 graduate of Kansas City Christian School in Prairie Village, Kan., 7 p.m., Assembly Area