You are at:Home»Local News»Fort Riley»Former Big Red One Soldier to be awarded Distinguished Service Cross 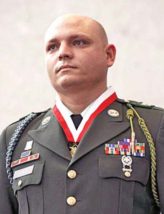 Debolt, an Ohio native entered the U.S Army in 2007 and was deployed to Operation Enduring Freedom in 2008. After his vehicle struck an improvised explosive device and became engulfed in flames, Pvt. Debolt extracted himself and extinguished the flames covering more than half of his body. Realizing his teammates were still trapped inside the burning wreckage, and ignoring his own extensive wounds and the continued enemy small arms and rocket propelled grenade fire directed at his vehicle, he helped pull his fellow soldiers from the vehicle to safety while extinguishing their burning clothing. His actions helped save the life of one fellow soldier while helping prevent serious injury to another. He was honorably discharged from the Army Sept. 28, 2008.

Lt. General Paul E. Funk II, III Corps and Fort Hood commanding general will host the ceremony which begins at 10:30 a.m. in Victory Park at Fort Riley, next to the division headquarters.