You are at:Home»Local News»K-State’s Myers: “I’m glad I don’t have to advise this president” 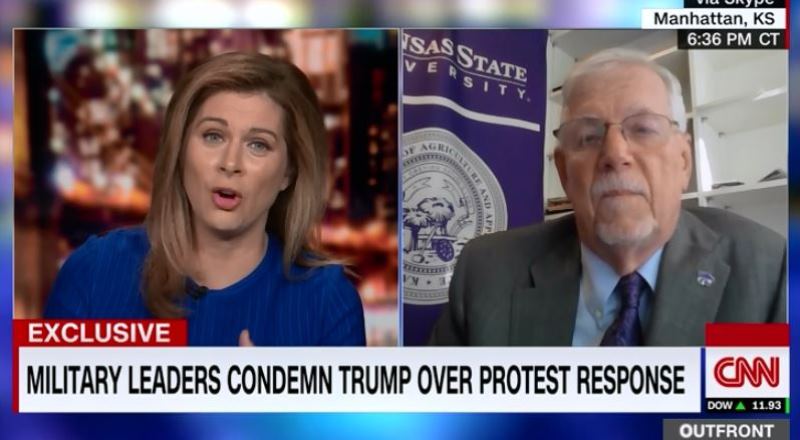 Kansas State University President and retired 4 star General Richard Myers told CNN’s Erin Burnett Thursday he was saddened by the military’s use of force Monday in Washington, D.C. to break up a mostly peaceful protest.

Myers, who served as President George W. Bush’s Joint Chief of Staff from 2001 to 2005, says it wasn’t right that military force disturbed that protest and says everyone should shed a tear for that.

“The other thing I thought and this is probably very selfish, I said I’m glad I don’t have to advise this president. I’m sure the senior military leadership is finding it really difficult these days to provide good, sound military advice,” he said.

Flash bangs, gas and rubber bullets were dispersed to break up the crowd of protesters around Lafayette Square before Trump walked to the square and stood in front of St. John’s Episcopal Church and held up a bible.

Secretary of Defense Mark Esper and current Chief of Staff Mark Milley caught criticism for the move, but have both said they didn’t know about the president’s planned photo op at a nearby church damaged over the weekend. Myers says he believes they didn’t know and says Secretary Esper’s comments afterward were appropriate.

“I think he brought back some of the words perhaps had been used earlier about dominating the battle space or whatever those terms were. Really inappropriate. Let’s go back to the Constitution which every military officer and every public defendant swears to defend, including the first amendment which gives people the right to peacefully protest,” he said. “On that particular incident they were peacefully protesting and that was unconstitutional.”

Myers, who is typically not an outspoken critic of leadership, says he felt compelled to speak out on behalf of his colleagues, but says he doesn’t like to see the military politicized.

He joins other high ranking former military officials to weigh in on recent events, including Trump’s former Secretary of Defense Gen. John Mattis,