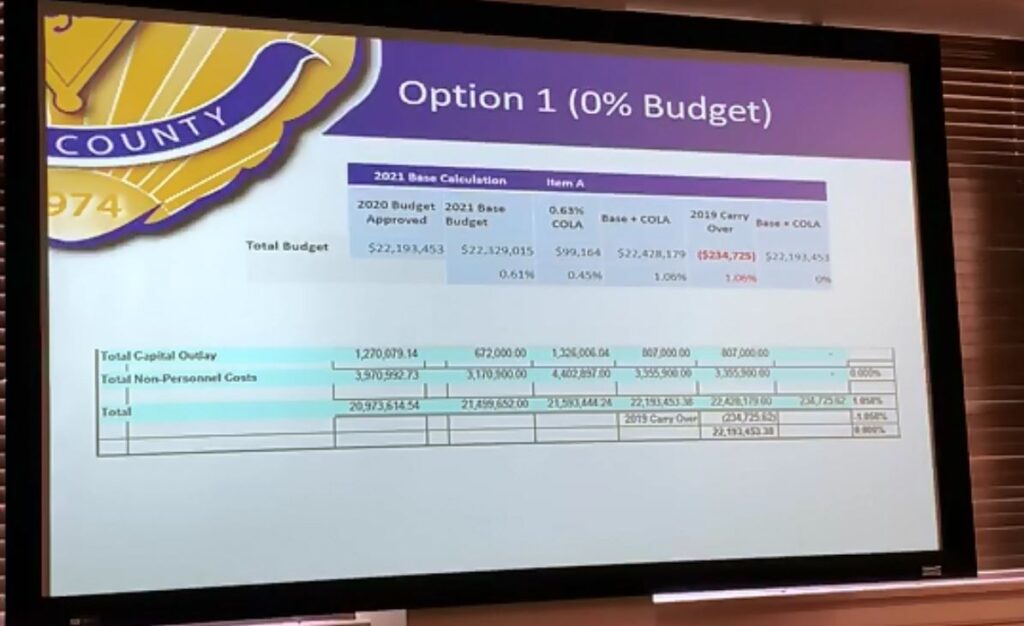 Screenshot showing Option 1 for the 2021 budget.

The Riley County Law Board on Monday approved for publication its $22.1 million budget for fiscal year 2021, but will need a special meeting to finalize it ahead of the publication date.
Within the budget, $470,000 is being slashed outside of merits and cost of living adjustments. The budget, while flat year-over-year in terms of overall dollars, still allows for a 0.63 percent COLA on top of the 2021 base of $22.3 million. It subtracts $234,000 from unused budget funds, commonly called carry-over funds.  RCPD Captain Josh Kyle explains why it was included within their projections.
“We feel that it’s reasonable and appropriate at this time to consider carry over because we purposely set this money aside to offset future personnel costs,” he said.
Law Board member and Manhattan Mayor Pro Tem Wynn Butler argued that the cost of living adjustment, like everything else should be flat, otherwise it may cost other city employees their jobs.
“I’d love to support and give everybody a COLA and pay raise. If we do that for the police department, then we have to do it for the fire department, and every city employee,” he said. “That kid that goes out here and digs a hole because of a water main break, he’s pretty essential too.”
The vote was 5 to 2 in favor of publication. Board members Butler and Craig Beardsley voted against publication. A majority supported the measure over additional options which would have slashed the budget further, rejecting one that would result in any staff layoffs. Part of the reasoning behind the COLA was to ensure the police department doesn’t fall behind in terms of increasing pay benefits to recruit and retain staff in the long-term.
There was no consensus among Law Board members on reducing or eliminating the COLA outright, though board member Robert Ward suggested he’d be in favor of eliminating it, which would create an additional $99,000 in cuts.
“I guess I’d feel more comfortable if we did away with it entirely,” he said.
A special Law Board meeting will be held between now and June 5 to finalize the budget. Two other budget proposals also were presented Monday that would have resulted in a .09 percent decrease or 5 percent decrease in the funding.
Also discussed was how the Riley County Police Department’s finances remain through the rest of the 2020 budget year.

The department will eventually receive monies from property taxes, but delinquency rates may cause those monies to come in later than anticipated. Capt. Kyle says by law, the governing bodies can not change its obligation mid-year to the police department and would be obligated to fund the department out of its general fund if the situation became dire. He suggested a deferment program could be necessary to help the City of Manhattan and Riley County fulfill its obligations to the department.

“I don’t know what that would look like, but it may provide us with an opportunity to delay the payments that would go into the RCPD and if they occur this year, they would count toward the budget. If those payments came in after this budget year, then they would become carry over,” he said.
Currently the delinquency rate on property tax payments is about 2 percent. As a result, RCPD is minimizing its costs wherever possible. This includes travel and training restrictions, close monitoring of overtime and not filling certain positions.
“RCPD is cutting costs, it’s cutting a lot of costs. It’s going to produce savings to the taxpayers, we know that. It’s just a matter of how and when,” Kyle said.
Share. Twitter Facebook Pinterest LinkedIn Tumblr Email