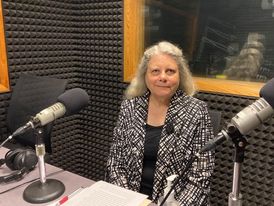 The longtime executive director of the Riley County Historical Museum has died.

“We are completely heartbroken. She was one of the best and is so missed already,” said Allana Parker, curator of design at the museum in an email Thursday.

“There is no one I know that had the knowledge, background, love and compassion for local history as she did,” said Riley County Commission Chair John Ford. “It was always a marvel to watch her light up when discussing Riley County’s past.”

Collins earned her bachelor’s and master’s degree in history from K-State.

Collins is survived by her husband G.W. Clift and son John.

Yorgensen-Meloan-Londeen Funeral Home of Manhattan is in charge of arrangements. A funeral will take place Tuesday at 1:30 p.m. at the First Methodist Church.