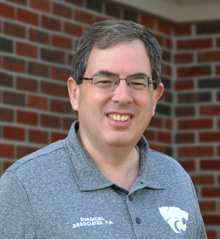 Hospitals are desperately trying to keep up with the influx of cases of COVID-19, the novel coronavirus.

Dr. David Pauls, a general surgeon with Ascension Via Christi Hospital in Manhattan has volunteered to become the hospital’s senior triage officer. Surgeons like Dr. Pauls are trained in triage through mass disaster situations.

“Fortunately I’ve never been in a situation where I’ve had to do a major, big type triage situation. Part of it is that I’ve been here for a long time. It’s my way of doing what I can to help the community,” he said.

While the situation isn’t dire yet at the local level, there are growing concerns that medical communities across the country don’t have the resources available for a mass influx of cases. New York City, largely seen as the epicenter for the pandemic reported over 47,000 cases by Thursday with over 1,300 deaths. Earlier this week, health officials said Riley County and surrounding areas likely won’t see a peak in the number of cases until late April to early May.

“There’s so much we don’t know. We don’t know how many cases we really have. We know it’s very infectious but we don’t know what those hard numbers are. We have lots of predictions for numbers of cases and unfortunately numbers of deaths but those predictions all vary by different magnitude,” he said.

Pauls says right now the effort is to slow down the spread so as not to overwhelm medical facilities.

“If we can keep those numbers of cases low, then we don’t get into a situation where we reach that ceiling on our resources and have to start making harder decisions as to who gets what treatment,” he said.

Dr. Pauls is on the board of directors for the Center for Bioethics and Culture Network, based in the San Francisco area. The group focuses on bioethical issues profoundly impacting humanity, especially in the lives of the most vulnerable populations.

He cites the 1995 Oklahoma City bombing, which killed 168 people and injured hundreds more as a regional example of when a triage was used. In situations like that he says patients are categorized into three levels –  immediate, urgent situations that have to be treated within minutes to save a life. The next segment would be those that are more urgent but don’t require an immediate, within an hour of treatment. The lowest tier would include those with minor injuries that can wait (i.e. cuts, scrapes, bruises). In some situations he says there is what’s called the “expectant” category.

“These are people who have such overwhelming injuries that the likelihood of survival is low. Then unfortunately if you get into a situation where you have limited resources, those are the people who you have to try to keep them comfortable, try to do what you can for them, but they’re not going to get the maximal therapy that other people might,” he said.

Kansas has guidelines in place for use of modified health protocols in acute care hospitals during public health emergencies, established in 2009, which was last revised in 2013. Dr. Pauls says it was established to standardize guidelines between all hospitals so that a uniform level of care can be provided to everyone, using what’s called the SOFA score (Sequential Organ Failure Assessment Score)

“So that’s just a way of judging how sick a patient is and depending on the score and some other medical issues, you can assign a priority to them,” he said.

Fortunately he says we’re not in a place where those decisions are currently having to be made, but it does emphasize the importance of staying at home, minimizing risk of exposure to, not only COVID-19, but also the risk for unexpected injury from other incidents (i.e. a motor vehicle accidents, fires or other life-threatening circumstances). If a hospital can’t treat a patient locally and that patient has to be transferred, there exists the possibility that it may become increasingly difficult to find a hospital that can treat that patient if they too are overwhelmed.

To read more about the Kansas Guidelines for the Use of Modified Health Care Protocols in Acute Care Hospitals During Public Health Emergencies, see below.