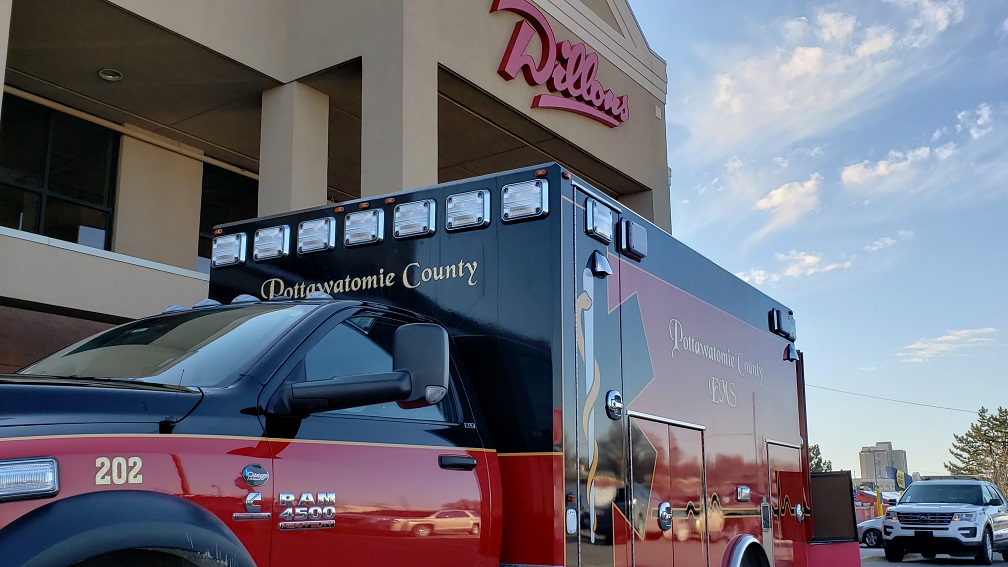 A Pottawatomie County EMS ambulance parked outside Dillon’s in 2019 during a Fill the Box food drive. (courtesy photo)

Pottawatomie County EMS saw a nearly 4.5 percent drop in its overall calls for service in 2020, some of which is attributed to the pandemic.

EMS Director Hal Bumgarner informed county commissioners Monday that for the third year in a row, Wamego handled the most call volume in the county, with Onaga seeing one of the sharpest increases in call volume.

The county’s fleet of ambulances racked up over 65,000 miles in 2020. Bumgarner says the industry standard states an organization should get about 150 to 250 thousand miles out of its fleet every four to seven years.

“That doesn’t work for Pott County EMS because we are so rural and we don’t have that high of a call volume. So my goal is to extend that target range to seven to 10 years for these trucks,” he says.

Doing so, he says will increase the maximum longevity of each ambulance compared to having to replace them every six years.

At least two of the fleet’s eight ambulances will need to be replaced soon with one already over 132,000 miles and another over 100,000 miles, scheduled for replacement in 2022.

“When we get ready to order another truck this year, by the time we pick it up, it’s going to be December at the earliest. So that truck is going to have another 15 to 20,000 miles on it,” he said.

“Let’s say you’re trading in (Ambulance No. 204) and your ambulance comes in December and 204 only has 140,000 miles on it and there’s nothing wrong with it, you’re getting killed. I would shelf your new ambulance and mile out your other one, otherwise you’re just giving away a good ambulance,” he said.

The commission gave consensus EMS to purchase a new ambulance, with Riat’s recommendation added to the motion.

Slides from the EMS report from Monday’s agenda and packet are available here.