Manhattan continues to work on the details of a possible 2020 ballot question to extend the existing economic development sales tax another 10 years and expand it to be city-wide.

City Commissioners and administration for the last few budget cycles have been eyeing renewing or replacing the existing half cent tax, which expires in 2022. The current tax is a Riley County tax that annually draws about $3 million in revenue for Manhattan and an additional $2 million for the county and cities like Riley, Randolph and Leonardville. Only in effect in Riley County, city officials prefer a new city-wide tax that would increase taxes at Manhattan businesses in Pottawatomie County and more than double Manhattan’s annual take-away to $6.5 million per year.

City officials say the current economic development funds job creation and workforce attraction and retention initiatives through the Chamber of Commerce, assists Manhattan with property tax relief by providing in the realm of 2 mills per year in support for the bond and interest fund, and helps with public infrastructure projects. Deputy City Manager Jason Hilgers has said the funding is key for long-term planning by the city — especially amid difficult COVID-19 related hits to the 2020 and 2021 city budgets — and ensuring Manhattan’s ability to stay competitive in the market.

“We have a great pull factor here in Manhattan,” says Hilgers, referring to past figures showing Manhattan has a 1.33 pull factor indicating the city’s place as a retail draw to outside residents. “A lot of people travel in to shop, taking advantage of that — we do over a billion dollars in sales annually, historically, and 25 percent of that total comes from people that don’t live in Manhattan.

“So the sales tax is always a great opportunity for us to allow our visitors and those who don’t live here to help us keep our infrastructure viable and attractive.”

Commissioners Tuesday weighed the merits of different breakdowns on where to commit funds and whether to include specific percentages in the ballot question. On the encouragement of Commissioner Aaron Estabrook, earmarking funds to some degree for housing initiatives was included in numerous proposals.

“This gives a dedicated source to leverage against,” Estabrook says, referring to the possibility of pursuing greater grant funding for community housing initiatives with the proposed $650,000. “It might not solve big chunks, but it gives us an opportunity, a way to get into that money that a lot of our competitors are already tapping into because they’re entitlement communities.”

Some specific splits included a 70/20/10 division of revenue for infrastructure and development debt relief, workforce initiatives and housing initiatives respectively. Another proposal constituted a 60/30/10 split with an additional 10 percent of the revenue earmarked toward job creation plans.

Multiple commissioners were open to a 70/20/10 division — though the exact division of funding was not settled upon — and expressed interest in specifying the approximate percentage split of the revenue in the ballot question as well. Commissioners also debated how to best present the question to voters, questioning whether a 10/20/70 split would sound more appealing than 70/20/10, whether to specify current and future debt relief in the question, and whether a different word than debt should be included in a final question.

“If you’re not going to have at least 20 percent for job creation, it’s really hard to call it an economic development kind of a thing,” says Commissioner Mark Hatesohl. “Between the 70 percent for the projects that are coming on board that have been built already and the one’s we want to continue to do in North Campus, Aggieville and stuff like that, I think we’re going to want 70 percent all available to us for that.”

Mayor Pro Tem Wynn Butler also leaned toward the 70/20/10 split, saying delineating the division within the question itself will avoid any debates within future commissions around the intent of the funds and removes the necessity of a resolution.

Commissioner Linda Morse said at first the $650,000 for housing was more than she initially imagined. She pondered creating a city definition for workforce housing if that were to be specified in the ballot question, which Hatesohl opposed out of a desire to maintain flexibility if terminology changes. Morse was open to changing economic development focus away from landing big projects like Ultra ICE and more toward ‘creative’ approaches, though wanted to ensure support goes towards those businesses providing ‘meaningful’ jobs.

“I want to be sure we are not going to go down the rabbit hole again of minimum wage jobs at a call center,” says Morse. “We tend to deal with the businesses with the expectation they will pay the employees what’s called a living wage, or a wage that they can get by on, and I’m not always sure that that happens.”

Mayor Usha Reddi, though opposed to bringing a sales tax to the ballot at this time, preferred a 60/30/10 split to ensure more is reserved for job creation and businesses assistance. Reddi says she imagines a long fallout from COVID-19’s economic impact, saying the funding will need to be available to assist small businesses that may be struggling even years into the future. She also opted to reduce the debt relief segment of the division to prevent the revenue from promoting additional development, preferring that the funds be used to support existing debt without driving more costs.

Reddi also wanted to see a resolution that hammers out more of the legislative intent for the funds and to ensure economic development funds are reserved for companies paying higher wages — particularly with a $15 per hour floor.

“A lot falls on these hourly workers, and I think that’s the bare minimum that we should be looking at when we look at economic development as far as salaries,” says Reddi. “Especially with public funds.”

Butler, though, did not want to see any minimums set for economic development funding. He says the current process through the Chamber in which applicant businesses are scored based on eligibility — including wage structure — works as is without such a requirement.

“That is going to drive away people, we came to that conclusion because you have various wage structures in an organization,” says Butler. “We did push it towards the higher wage end of it, and I think that’s served us well — and that should stay in there.”

Reddi says promoting companies with higher salaries could help keep the region’s workforce from departing for areas that provide that.

Manhattan utility rates are likely to see higher than planned increases to fund the levee improvement project.
The city’s water and wastewater funds were on a multi-year rate restructuring plan with planned 3 percent yearly increases. This was to ensure the funds stay within recommended balance levels in order to sustain unexpected maintenance and repair costs or to ensure the organization stays solvent amid a major disaster.
But 2019 was a particularly wet year for the region, resulting in numerous precipitation-caused damages and subsequent expenses. Sanitary sewer interceptor failures and sinkholes on Hayes Drive added $810,000 in costs and the city is still waiting for FEMA reimbursement for 2019 expenses due to a backlog at KDEM. The water fund is also facing unplanned projects related to North Tuttle Creek Boulevard drainage channel improvements to the tune of $5 million.
Water consumption was up 80,000 units or $196,000 from 2019 — one of the worst years for the fund in nearly 20 years — but still down by 105,000 units of $259,000 from the 10 year average. Despite up to $750,000 in budget savings from deferring low priority projects, the beginning water fund balance still dropped from $8.39 million to $7.61 million in 2020. Wastewater service was up 2.1 percent, but the fund still dropped from $2.4 million to $1.89 million in 2020.
“It’s starting to become apparent that after 2025, we have a large amount of debt projects including the levee project that are forcing that recommended fund balance level higher and our projected fund balance lower,” says Assistant Director of Public Works Randy Dewitt.
This is compounded by $466,000 from water, $176,000 from storm water and $89,000 from wastewater proposed for transfer to assist the 2021 general fund and newly realized costs related to the city’s levee project. Already approved by commissioners, it aims to increase the performance of the structure after it had failed to provided the level of protection originally expected in 1993. Sixty-five percent of the more than $30 million project will be covered by federal funds, leaving the city with an originally anticipated $10 million share on the project.
Additional expenses and betterments outside of improvements identified by the U.S. Army Corps of Engineers increased the city’s costs to $14 million. That’s led staff to recommend a one-time 3 percent increase to water and wastewater bills on top of the planned 3 percent increase for 2021 for a total of 6 percent.
Stormwater customers would also see an additional one-year $1.66 surcharge per ERU as a result of the impact of the levee project on that fund. Stormwater rates are planned to flatten to $7.55 per ERU in ’22 for both residential and commercial customers. This is year 4 of the 5 year flattening, with residential customers slated to see an increase from $6.34 ERU to $6.92 ERU and commercial customers to see a rise from $5.47 ERU to $6.42 ERU.
Stormwater rates are based around equivalent residential units (ERU), or the amount of land on your property that is impervious and water cannot absorb into the ground. An ERU is 3,625 square feet of impervious area.
“A one percent increase now make a huge impact down the road,” says City Engineer Brian Johnson of the one-time rate increase on the stormwater fund balance. 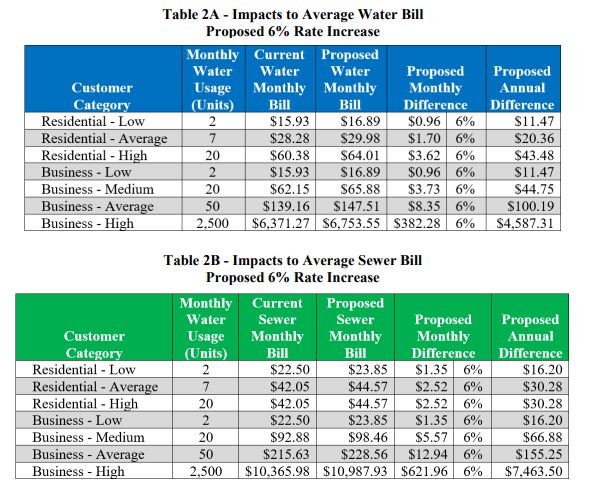